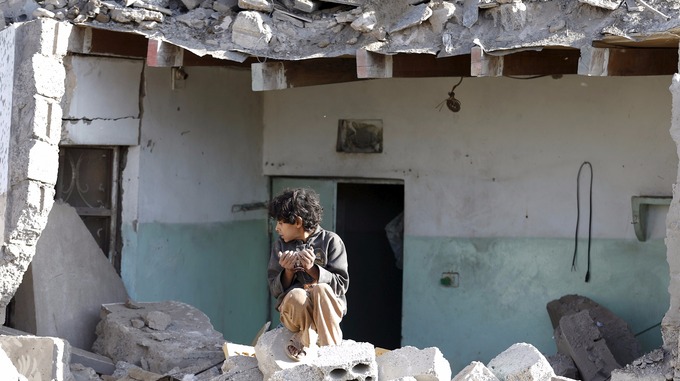 The Yemen multi-sided and sectarian crisis is getting worse.

Saudi Arabia launched airstrikes on Thursday with a coalition of other Gulf and Arab allies against the Iranian-backed Houthi Shi’ite fighters in Yemen.

As the Iranian-Saudi rivalry escalated rapidly in the last few years, the Yemeni card was considered for both a strategic one.

The two countries engaged in several proxy wars in the region (Iraq, Syria, Bahrain, Lebanon and Yemen), some of these wars turned into bloody civil wars between the Sunni and Shi’ite Muslims.

For many experts, the Arabian Peninsula country is now in the midst of civil war. Since the beginning of the year, bloody fighting has erupted in the country between Houthi fighters and the Saudi-backed government.

The Houthis and their allies – forces loyal to former president Ali Abdullah Saleh – seized the capital Sanaa and large parts of the country.

Saudi ambassador to the US, Adel al-Jubair, told reporters in Washington:

The operation is to defend and support the legitimate government of Yemen and prevent the radical Houthi movement from taking over the country.

– Adel al-Jubair, Saudi ambassador to the US

While Iran foreign minister called for an immediate halt of the military actions and airstrikes, Iranian media described it as US-backed aggression.

Yemen, with a population of 24 million – 35 per cent of which are Shi’ites – is a crossroads for regional powers as it lies on the gateway of the red sea.

The United States announced early this week that it evacuated the last 100 US troops from a military base in the south of the country, due the mounting violence.

The troops’ main mission was to fight Al Qaeda in the Arabian Peninsula (AQAP), the most active wing of the Islamist militant movement for years.

Yemen is the home base for AQAP.

Gilbert Doumit, a political analyst based in Beirut told ITV News he now expects rapid escalation in the violence in the whole region in next months.

Iran and Gulf countries are both losing their trust in the Western ability to deliver on any solution in the region; thus the need to protect themselves and their interests against each other.

He added that failed political transitions since 2011 have resulted in fractured states, while societies are accompanied by mass arming of militias based on their loyalties, in addition to the spread of sectarian hatred speech.

The Syrian Civil War has wrought a Terrible Toll on Women