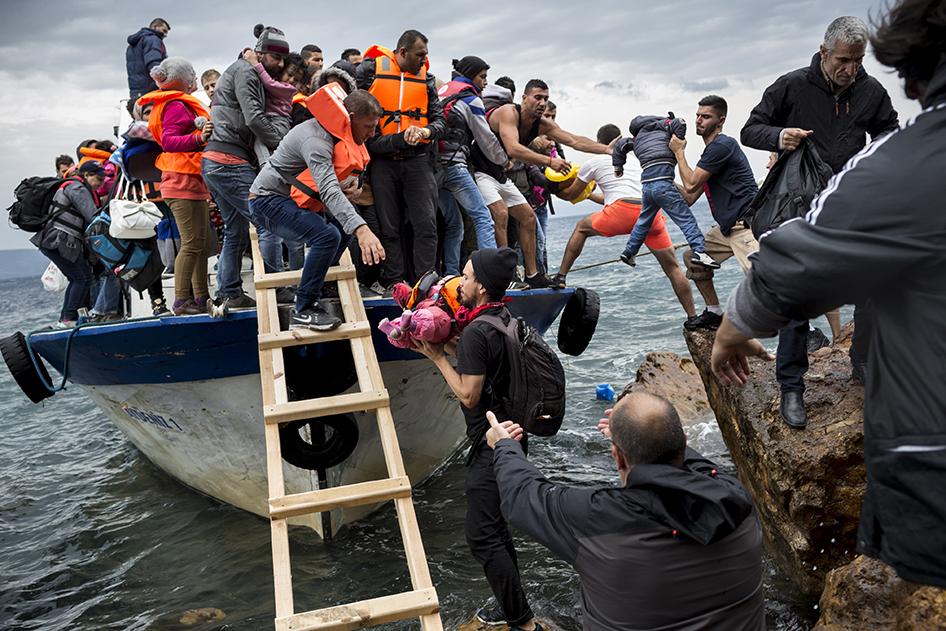 After a year in which Europe’s response to a surge in boat migration went from deeply flawed to truly awful, the situation in 2016 has only deteriorated. EU leaders are becoming increasingly shrill, policy proposals ever more unhinged, and dire predictions about the collapse of the European Union itself commonplace.

One million asylum seekers and migrants reached Europe by sea last year, and more than 65,000 crossed the Mediterranean in January. The numbers are high but manageable if it weren’t for the abysmal failure of collective leadership, with European governments proposing one bad idea after another in what seems to be a panicky scramble to stem the flow at all costs.

Bad idea #1: Pay Turkey to keep people there. Late last year, the EU agreed to give Turkey € 3 billion to improve conditions for the 2-3 million Syrian refugees Turkey hosts in exchange for stopping people from getting on the boats. The agreement could lead to important improvements in the lives of many, particularly if Turkey fulfills its commitment to grant Syrian refugees the right to work, but it also carries risks.  And certainly it makes sense for the EU to provide generous support to countries of first asylum which are struggling to cope with the massive numbers of refugees they are hosting.

But, while Turkey has been generous toward Syrian refugees, it has also begun to close off access and push people back into the Syrian war zone. A heavy-handed crackdown on departures could involve gross human rights abuses.

So far, of course, the deal with the EU hasn’t actually worked, with an average of 2,000 people per day arriving on Greek islands, in the worst winter weather.

Now, the leader of one of the parties in the Dutch coalition has proposed that EU countries agree to resettle hundreds of thousands of Syrians per year from Turkey in exchange for an agreement that Turkey take back, automatically, anyone who crosses the Aegean Sea. Never mind that such a move would be illegal under EU and international law and that Turkey doesn’t have a functioning asylum system or offer effective protection; imagine the prospect of taking exhausted people landing on beaches in the Greek islands, locking them up, ignoring their pleas for asylum or help, and putting them on the next ferry to Turkey.

Bad idea #2: Trap people in Greece. Since last Fall, countries along the land route from Greece have built or reinforced border fences, and periodically closed their borders entirely or to all but a handful of nationalities. Now Slovenia has proposed to virtually seal the Greece-Macedonia border, with Belgium advocating massive detention centers on the Greek side. The European Commission just gave Greece three months to get its act together—reinforce border controls and stop people from traveling onward—or risk being thrown out of Schengen, the open border arrangement shared by many European countries.

That sounds a lot like chucking everything off your bedroom floor into the closet and saying you’ve tidied up. Except we’re talking about human beings.

Everybody knows that Greece’s asylum system is a mess, that most asylum seekers receive no accommodation or assistance whatsoever, and that the country is still in a deep economic crisis. That’s why many domestic courts in Europe have blocked efforts to send asylum seekers back to Greece under the EU’s Dublin rule, which emphasizes the responsibility of the country of first entry to the EU. Greece has done a lot of things wrong, but trapping hundreds of thousands of people in Greece will create a humanitarian disaster in the EU country probably least able to deal with it. Besides, people will find other routes to reach effective protection further north.

The only way to manage migration and refugee flows is with an orderly, collective approach that fully respects the rights of migrants and asylum seekers. The relocation plan agreed by the EU Council last year, to move asylum seekers out of Greece and Italy, would be a start if member states would begin seriously implementing it.

Bad idea #3: Make life miserable for those who get here. Denmark just adopted a law allowing it to confiscate assets over €1,340 from asylum seekers to offset the costs of housing and services, and to delay family reunification for three years. Hungary locks up and prosecutes asylum seekers for unauthorized entry into the country. The UK has slashed support for asylum seekers—many of whom are entirely dependent on government aid because they are not allowed to work—by almost one third. Sweden and Germany, known for their generous policies, are moving to limit family reunification.

What’s completely lost in all of this is not just any sense of compassion but even a grip on reality.

Fearmongers talk up the threat of terrorism, but most of the people risking their lives to get to Europe are fleeing the horrors of war in Syria; the brutality of insurgent groups in Afghanistan, Iraq, and Somalia; or the repression of the Eritrean or Iranian governments. Demagogues thunder that asylum seekers just want to steal jobs or bleed the welfare system dry, but almost everyone acknowledges that the EU needs labor migration, and study after study shows that immigration brings net benefits to societies over the long-term.

Xenophobes warn that Europe’s cultural identity is at risk, and yet the founding treaty of the EU calls for societies characterized by pluralism, non-discrimination, tolerance, justice, solidarity and equality between women and men. That means welcoming refugees, and taking steps to integrate them in a way that respects these values and their identity.

German Chancellor Angela Merkel, who is now paying a political price for her leadership in the refugee crisis, famously said “we can do this” – wir schaffen das – in calling for a reasonable, collective, and compassionate response to the flow of asylum seekers.  These days, pretty much all we’re hearing from EU leaders is “We just can’t cope.”

There’s no doubt that the refugee crisis poses many challenges large and small today and in the years to come. But the EU, one of the richest regions of the world, is surely up to meeting those challenges while also upholding the EU’s laws and values. People, we can do this.