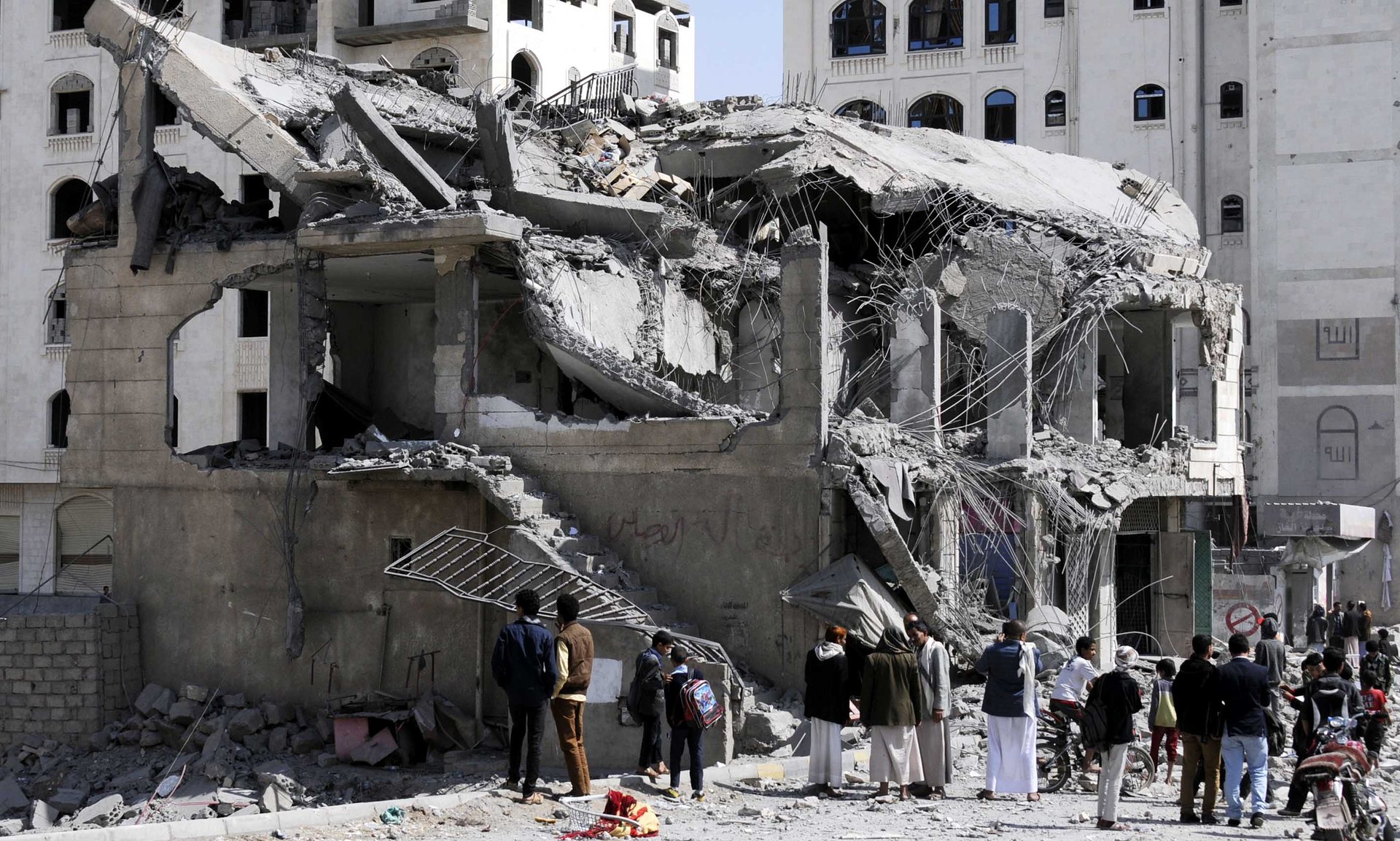 Britain is arming and aiding a fundamentalist dictatorship that’s bombing and killing civilians. This is an incontestable fact. The Saudi tyranny – gay-hating women-oppressors who kicked off the year with ~a mass beheading – has been waging war in Yemen for 10 months.
The world needs to know about Yemen’s war. But journalists are being silenced
Charlene Rodrigues
Read more

If the 26 million Yemenis were being besieged and bombed by an official enemy of the west, we might expect emotive calls to “do something” and militarily intervene. Well, we are intervening: not simply by supplying weapons but even by providing the Saudi-led coalition of Arab dictators with British military advisers. As the SNP’s Angus Robertson put it to the prime minister’s face, Britain is “effectively at war” – and yet few Britons know anything about it.

Since Saudi-led forces intervened in the conflict between President Hadi and Houthi rebels last March, around 6,000 Yemenis have been killed, perhaps half of them civilians. With the country under naval blockade, what the UN was already calling a “humanitarian catastrophe” six months ago has been unleashed. Eight in every 10 Yemenis are now dependent on humanitarian aid, and most do not have “adequate access to clean water or sanitation”, according to the UN.

Bombing raids have shredded the country’s healthcare system: 130 medical facilities have been targeted, including those run by Médecins Sans Frontières – “a total disregard for the rules of war”, as MSF says itself. The risk of famine looms: the UN believes more than 14 million people are food insecure, half of them severely so, while nearly one in 10 have been driven from their homes.

Yemen is a human-made disaster, and the fingerprints of the west are all over it. Consider what a UN panel report seen by this newspaper has revealed: that airstrikes have targeted “civilians and civilian objects, in violation of humanitarian law”, including everything from refugee camps to schools to weddings to buses.
Advertisement

More than 100 sorties, they believe, relate to “violations of international humanitarian law”. Yes, all sides have been accused of war crimes. But, according to the UN’s high commission for human rights, the Saudi forces are responsible for “a disproportionate amount” of attacks on civilians. No wonder, then, the war is being described as Saudi Arabia’s very own Vietnam.

Rather than condemning this dirty war, the United States stands fully behind its ally, one of the world’s most repugnant regimes. “We have made it clear that we stand with our friends in Saudi Arabia,” says Secretary of State John Kerry, a former member of Vietnam Veterans Against the War. But we surely need to hold our government to account for what it does in our name.

Since David Cameron became prime minister, Britain has sold the Saudi dictatorship nearly £6bn worth of arms. Crucially, since the Saudis began their bombing campaign, Britain has signed off more than 100 arms licences. The supply of military advisers underlines that this is no passive acquiescence in what the Saudis are doing: our government is directly involved. “We support Saudi forces through long-standing, pre-existing arrangements,” is how the Ministry of Defence euphemistically describes its role.

As Amnesty International puts it, Cameron’s government has “fuelled this … conflict through reckless arms sales which break its own laws”. According to legal advice given to them by Matrix Chambers lawyers, Britain is in violation of a number of obligations, including its own arms exports criteria and the EU’s common position on arms exports. Indeed, in 2014, a ministerial statement declared that Britain would “not grant a licence if there is a clear risk that the items might be used in the commission of a serious violation of international humanitarian law”.
Britain seems to have outsourced foreign policy to Saudi Arabia
Andrew Mitchell

The Campaign Against the Arms Trade has launched a legal action against the government for breaching international law. Astonishingly, as Labour have highlighted, parliament’s own watchdog on arms exports hasn’t met since the general election – that’s almost the entire time Saudi Arabia’s British-backed war has been waged.

Britain’s alliance with the Saudi dictators – who, chillingly, last week refused to rule out acquiring nuclear weapons from Pakistan – does not receive the scrutiny it deserves. It’s not simply about human rights, utterly appalling as the Saudi record is, locking up, lashing and killing dissidents, banning protests, political parties and trade unions, and depriving women of basic rights (incidentally, our government traded votes to ensure the Saudis were elected on to the UN human rights council – rather like giving Harold Shipman a seat on the British Medical Council). It is also about Saudi Arabia’s threat to our national security: the country is at the epicentre of international extremism.
Advertisement

Its assault on Yemen is not only killing, maiming and inflicting mass suffering. It is also building up bitterness. With our government fully behind its Saudi allies, resentment towards Britain is surely growing, resentment that can be all too easily manipulated by extremists.

If the British people were fully aware of what was happening, Britain’s involvement would surely be unsustainable. But there are too few voices speaking out. One rare example is Andrew Mitchell, the former Conservative cabinet minister, who said a few months ago: “We must take seriously the possibility that British-made arms are being used to kill civilians in Yemen.” Since then, we know of at least one fatal strike using a British missile, on a ceramics factory.

Yemen needs a peaceful, negotiated settlement. Its people need humanitarian assistance, not more bombs. But Britain is helping to escalate this war, aiding a cruel regime that it knows is bombing civilians. This is criminal, literally. And the government must be held responsible for it.