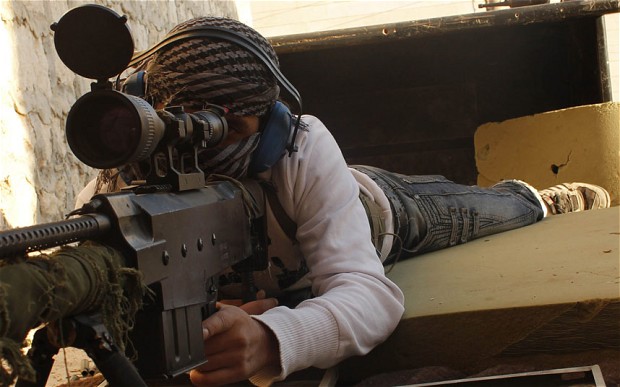 Al-Qaeda has committed ‘crime against humanity’ in Syria

A researcher from the organisation interviewed survivors of an offensive against villages occupied by members of the Alawite sect to which the Assad family belongs in Latakia province, confirming widespread reports of atrocities.

The attack followed regime massacres of hundreds of civilians in two Sunni towns in the same province in May, and was described by the militants’ own propaganda outlets in highly vengeful, sectarian terms.

Alawite villagers told how they returned to their homes to find relatives – often those too old or infirm to flee – butchered.

“My dad stayed in the house,” said one man who fled with his mother.

“He was killed in his bed. My aunt, she is an 80-year-old blind woman, was also killed in her room.”

In another graphic account, Hassan Shebli, who lived in the village of Barouda, showed HRW the house where his wife, Shamieh Ali Darwish, and son, Safwan Shebli, 23, were killed. Both were disabled. “You can still see the blood,” he said.

HRW found videos posted online by the militants with Mrs Darwish and Safwan Shebli at home, Mrs Darwish is seen walking on crutches. But when Mr Shebli returned, he found their graves behind the house. Three other members of the extended Shebli family were killed.

Altogether, the researcher compiled a list of names of 190 civilians who had been killed in the attacks, which began on August 4. She had evidence that 67 had been executed or otherwise killed illegally. The evidence in other cases was not clear.

“The evidence gathered by Human Rights Watch strongly suggests that the killings, hostage taking, and other abuses committed by the opposition forces on August 4 rise to the level of crimes against humanity,” the report concludes. “The scale and organization of these crimes indicate that they were systematic as well as being planned as part of an attack on a civilian population.”

About 200 civilians were taken as hostages by the rebels, the report added. Negotiations are continuing for their release. It said the attacks had a clear sectarian agenda, with a local Alawite shrine desecrated and the sheikh who was the presiding religious authority executed for supporting Mr Assad.

Early in May, Alawite-led militias killed over 250 and as many as 450 people in two districts of the town of Baniyas, on Latakia’s coast. Rebel militias swore revenge at the time.

The HRW researcher was escorted to the villages by regime officials and soldiers, who now control the area again, on the first trip inside the country licensed by the government.

However, its report points out that it has previously accused the regime of war crimes and crimes against humanity, and that accusations against one side do not vindicate the other. In a finding that has international ramifications, it says funding for the attack on the Alawite villages was raised privately in the Gulf, including wealthy donors in Kuwait.

It was led by mainly jihadist groups, including the Islamic State of Iraq and the Levant (ISIL), Jabhat al-Nusra, and the “foreign legion” of Jaish al-Muhajireen wal-Ansar, all of which are affiliated to al-Qaeda, and two other militant Islamist groups, Ahrar al-Sham, Suqour al-Ezz.

The researcher, Lama Fakih, said it was not clear whether rebels of the western-backed Free Syrian Army participated in the killings, and the political opposition in exile, the Syrian National Coalition, said in a statement that what happened did “not represent an effort by the true Syrian opposition, but rather a shameful one-time attack by outlier extremist groups that thrive under the hand of the Assad regime”.

HRW urged Gulf states and the authorities in Turkey, through which most of the foreign support for the militant Islamists passes, to do more to cut off supply lines to them.

The Syrian Civil War has wrought a Terrible Toll on Women